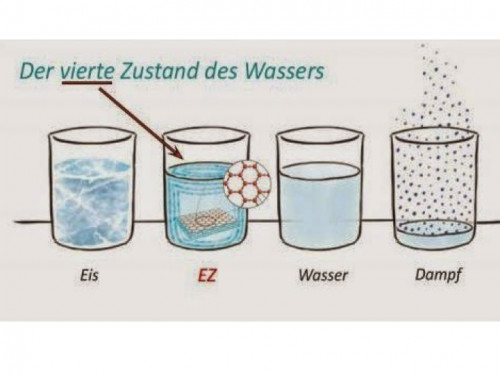 Through the water researcher from Washington science has approached the view that water stores information and demonstrates completely new mechanisms in water.

A research team from the University of Washington was able to disclose the secret of water. The team led by Gerald Pollack (he visited Johann Grander in Jochberg in the year 2010) discovered a fourth physical state of water:

Apart from solid, liquid and gaseous forms the researchers were able to identify a fourth state, in which the molecules of liquid water are arranged in a hexagonal "crystal lattice".

This state shows some amazing characteristics, which turns our picture of water upside down and solves many questions surrounding water.

Water is a mysterious element even from a scientific perspective. Despite 200 years of water research science has not managed to completely understand the ever-present element of water.

The official theory surrounding water is full of holes, the so-called anomalies, which cannot be satisfactorily explained with the conventional theory. Freezing point, boiling point, density, surface tension - even with these basic things water acts differently in comparison to what theory would expect it to act.

However, water is also a fascinating element apart from science. It is the origin and elixir of life, the main component of the human body and our most important food stuff.

Researchers from the USA have presented a new water theory, that could possibly explain the anomalies of water as well as an academic foundation for the refinement of drinking water.

Researchers have established that water begins to arrange itself when near hydrophilic surfaces, such as in our bodies. Near the surface a layer of very pure water forms, whereby this layer changes to a completely new form of water, which is drastically different from traditional H2O.

This zone, only measuring a quarter millimeter thickness, with the mysterious water has been called "exclusion zone" (EZ), because the water in this zone doesn't just arrange itself, but it also purifies itself as well: due to electric forces small particles are driven out of the EZ layer.

This phenomenon is not new and there have been numerous attempts to explain it with traditional theories. However, Pollack could dispell all these theories as plausible explanations during his two years of work with his team.

But that was not enough: The water in the EZ displayed completely new characteristics, such as an altered electric resistance, a new, even higher, almost gel-like viscosity, an altered ph value and a clearly negative charge.

Apart from liquid, solid and gaseous forms researchers discovered a new physical state of water. This doesn't just appear in the body's interior along the muscle fibers and cell membranes, as it turned out, but it is a transitional form, undiscovered thus far, between liquid and frozen water.

The result puzzled the researchers and it was quickly evident that EZ water plays a significant roll in living organisms.

The first step was to solve the secret on where water got its energy from in order to maintain such a highly ordered structure. After several tests the answer was found: from light, in particular from invisible infra-red light. If the experimental set-up was protected from light rays, EZ water could not form, however with sunlight and infra-red light the formation could even be expanded: exposure enlargened the EZ zone three-fold.

Even this was fascinating discovery: water stores the energy of the sunlight in the form of an ordered, hexagonal crystal structure. The water was not esoterically, but rather physically "energized".

Not only the energy, but also the structure play an important roll for the body.

The research results by Pollack are impressive in many respects. Water is much more than simply a secondary element in the background of our biological processes. It is an essential part of it.

It almost appears as if the research done to date wasn't able to see the forest for all the trees. Even in the world of physics where physicists have established the hypothesis for many years now, that space itself could be an ordered energy medium, which influences the things in it, yet Pollack discovered water as an essential component of bio-chemistry.

A fascinating analogy where answers suddenly appear in alleged empty space between things, that we have been studying for years.

Pollack is an important voice in an even louder choir of researchers, who have determined, that water is much more than it states in our school books: water can have very different qualities, that not only depend on the dissolved substances in it, but also from the structure of water.

His research shows, that water in living organisms is basically different from water that flows out of our taps:

Lively water is ordered and interacts structurally with the substances and living organisms in it.

and all of Johann Grander's work comes full circle. He was the one who established over 30 years ago that water stores information and can transfer it laying the basic principles of the GRANDER water revitalisation.

More on this topic:

>> Our Knowledge is but a Drop (CLIP in german)