The following article explores the historic development of the terminology and definitions of GRANDER® water revitalization, e.g. regarding the highly coherent functional water (previously often referred to as ‘information water’) as a process factor.

The term ‘information water’ dates back to the 1970s and was born out of the necessity to find a name for a novel process factor in water physics that had yet to be defined.

When Johann Grander first developed his fundamental ideas (which are scientific hypotheses documented using sound methodology and based on experiments that can be and have been replicated), applied water physics had not yet been established as an independent scientific discipline and the terminology for the phenomenon of water revitalization had yet to be coined. Back then, also quantum physics was a very young discipline still defining its boundaries.

Today, in 2019, terms like ‘quantum entanglement’ and ‘spooky action at a distance’ are recognized phenomena in quantum mechanics and experimental physics. Quantum entanglement refers to the capacity of two spatially separated particles to exchange information on their properties without a time delay. This concept had contradicted all laws of classical physics until the Northern Irish physicist John Stewart Bell, who went on to win a Nobel prize, discovered unambiguous evidence showing that Einstein had been on the wrong track[1]. In 2016, the interdisciplinary scientific cooperation of European universities and research institutes at WETSUS – European Centre of Excellence for Sustainable Water Technology (https://www.wetsus.nl/research/research-institutes) resulted in a breakthrough profoundly changing the way magnetic water treatment (MWT) is viewed in water physics[2] and providing a solid scientific foundation for the hypotheses of GRANDER® water revitalization for the first time.

The highly coherent functional water used in GRANDER® Circulation Units and Energy Rod Circulation Doubles plays a vital role in initiating the GRANDER® revitalization process and, together with MWT, causes the GRANDER® effect in water revitalization, which has been documented for many years. The highly coherent functional water (in the past often referred to as ‘information water’) used in the revitalization process is produced by physically treating water from the Stephanie spring in the Jochberg copper mine with the method developed by Johann Grander. 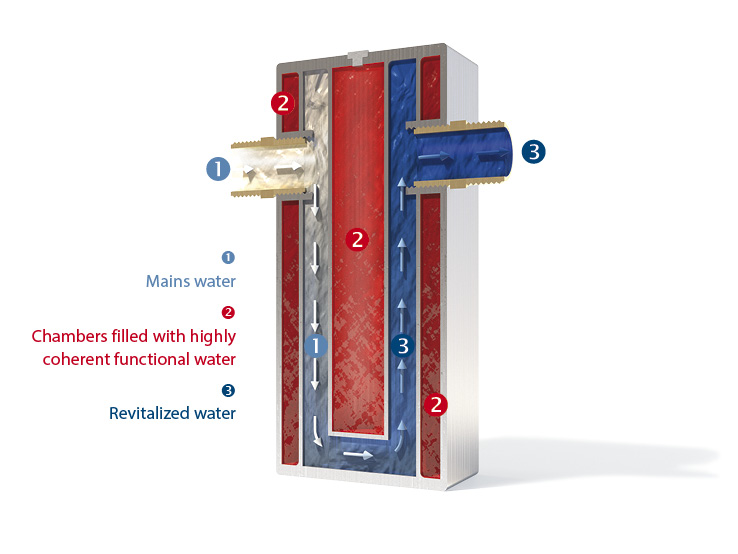