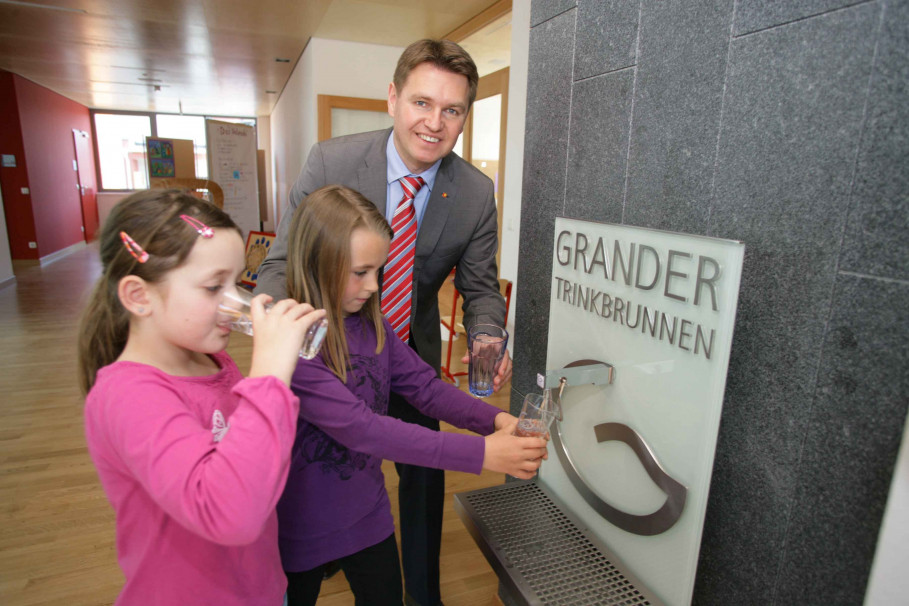 At the Eco-School in Neutal, Austria revitalized GRANDER® water has been running out of the taps and everyone, teachers, children and the mayor, are all very happy about that.  "The children drink much more in comparison and during the breaks there is a rush to the GRANDER® fountain," Erich Trummer reports, mayor of Neutal.

If children drink too little, it can have a negative effect on their ability to concentrate and their capability of being attentive.  We already know that water is the most suitable drink to prevent lack of optimal performance and attentiveness.  At the eco-school in Neutal, Austria they have taken it one step further:  GRANDER® water is flowing from the taps and both teachers and pupils alike are thrilled about this.  “The children are now drinking much more than before – there is quite a line up at the Grander fountain during the breaks,” Erich Trummer, mayor of Neutal, comments enthusiastically.

For the municipality it was already clear during the planning stages of the eco-school in Neutal that the school would be equipped with GRANDER®.  The eco-school, which is based on:

sees itself as a symbol of modern architecture in harmony with nature.  Under these aspects combined with the positive experiences the municipality has made with the GRANDER revitalized forest pool, no one wanted to do without the GRANDER® water revitalisation at the eco-school.

“Drinking water as well as a healthy snack has become an integrated part of the school day,”reports Monika Landauer, school principal, who stands behind this philosophy 100% along with her teaching staff, and thoroughly enjoys the revitalized water herself.

The eco-school in Neutal located in central Burgenland is completely equipped with GRANDER® water – not only in terms of drinking water, but also significant improvements can be seen in the heating system due to GRANDER® water revitalisation.  By means of revitalisation in the heating system the room temperature and with that the atmosphere in the rooms has become better as well.  In addition, costs can be reduced and energy is saved at the same time.

Grander has a huge “fan base” not only in Neutal,

but also throughout Burgenland where the important value of water revitalisation has been realized, which can also be attributed to the efforts of Valentin Kocaget.  As a GRANDER® consultant it is a personal matter of concern to promote the benefits of water revitalisation.  “I want to help in giving back water in our region the significance that it deserves,” comments Kocaget, a local village dweller of Burgenland.  In his efforts he sites positive examples through practical experiences, of which he has many whether in industrial companies, breweries, wine growers, bakers, butchers or swimming pools.  The practical successes within the district of Oberpullendorf alone have been enormous.  Top results could also be reached with GRANDER® water revitalisation at the Kindergarten in Oberpullendorf where the heating water has proven to have drinking water quality.