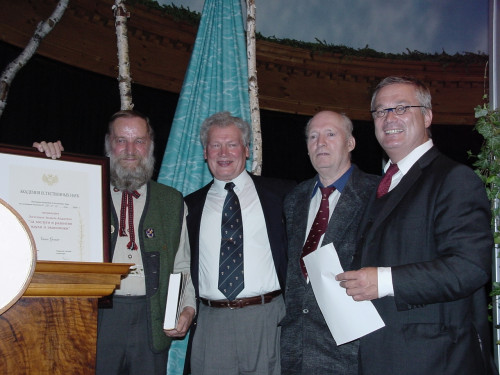 Johann Grander has been presented with awards and honored for his service and life work.

As the first and only Austrian, Johann Grander was awarded  the Silver Honorary Award by the Russian Academy of Natural Science, whose members include 200 Nobel Prize winners.  Numerous well-known and respected scientific institutes have intensively studied the GRANDER® Water Revitalization for several years and have come to the conclusion:

By means of the GRANDER® Water Reviatlizaton it is possible to strengthen the energy and information properties of the water and thereby make the water biologically more valuable.  Johann Grander's discovery demands further development from science and ecology through the new knowledge about the structure of water and is of great importance for science.

>> Film: Award of the Russian Academy of Natural Sciences -1

>> Film: Award of the Russian Academy of Natural Sciences -2

>> Film: Award of the Russian Academy of Natural Sciences -3

In Austria Johann Grander was recognized for his life work - the discovery of the Water Revitalization process - with the "Honorary Cross for Science and Art" of the Republic Austria.